Blue Jay Slim & the Tone Blasters have only been together for a little more than a year, but already, the Bucks County-based blues trio is a Hall of Fame act.

The group is being inducted into the Blues Hall of Fame, representing the state of Delaware, and will celebrate with a performance Saturday at the Blue Parrot in Wilmington. (The Hall of Fame has state ambassadors who get to nominate acts for induction; Delaware ambassador Mark Diamond nominated Blue Jay Slim.)

“It’s not how long you’ve been together, or how many times you play — it’s your reputation,” says lead singer/guitarist Jay Pinkus of Richboro. “I used to play there all the time, and the last time we were there for a benefit, Mark told us we were nominated for induction.”

Pinkus formed the band in 2012 with bassist Kenny Githens of Glendora, N.J., after the two played together for about five years in Scoville Blues. Drummer Bob Ridge of Langhorne Manor rounds out the trio.

Pinkus, 63, says he’s enjoying fronting his own band, as well as playing with such a stripped-down lineup.

“You don’t have to deal with as many personalities, and with three guys, it’s a lot easier to book a gig because you don’t have to charge as much,” he says. “And for me, as the singer and guitarist, there’s a lot more focus than if I’m just playing guitar.

“With Scoville, I sang a couple of times, and back in the day, I’d be in bands where I’d be the lead singer simply because no one else wanted to sing. But this, I really enjoy.”

Pinkus also plays in a duo, Blue Jay & Bags, with Dave Badgley, the harp and saxophone player from Scoville Blues. The pair is performing tonight at Red Hot & Blue in Cherry Hill.

He also makes annual trips to Mexico to vacation and perform, where, he quips, “I am the blues scene.”

The Tone Blasters are working on an album at Buckeye Recording in Philadelphia and have enjoyed some relatively high-profile gigs over the last year, including opening for Marcia Ball last week at the Sellersville Theater and Savoy Brown at Sellersville a few months before that.

“It’s been a really good year,” Pinkus says. “The whole thing is just fun. I’m not in it for the money — it’s nice to make a little money, but the main thing is that it’s fun. When it ain’t fun, it’s not worth doing, especially at my age.” 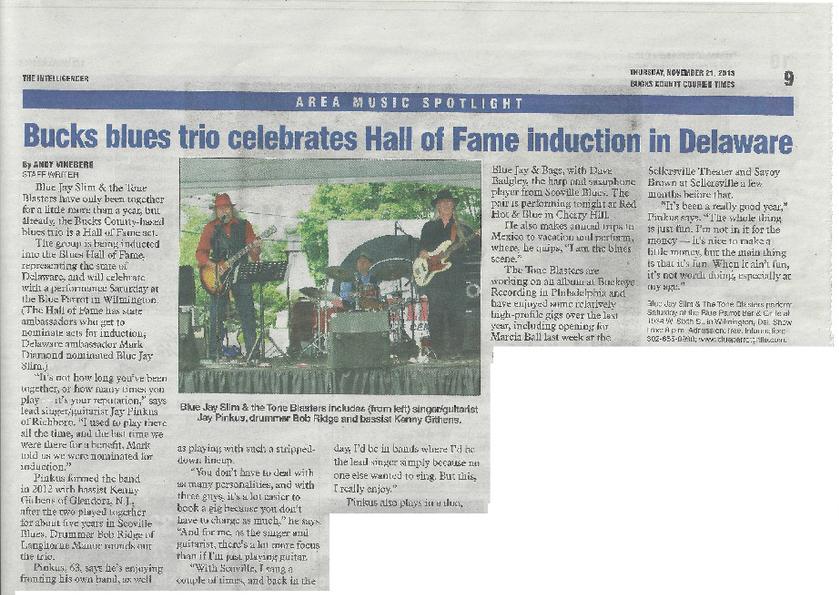